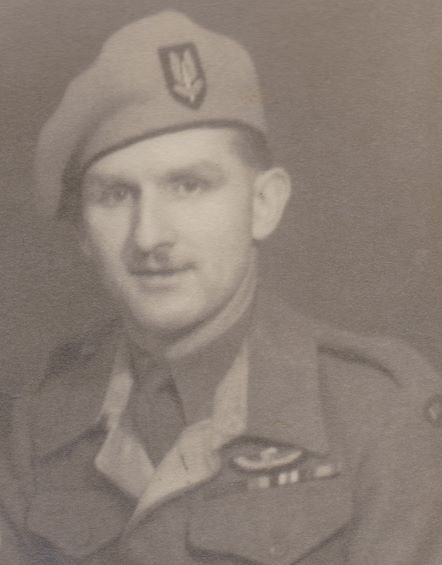 Private Dennis "Chippy" Saunders was a member of the New Forest Scout Section, later joining 1 SAS and was one of the first half dozen men to land in France on D Day.

He had been a regular soldier before the war, serving with the 2nd Wiltshire regiment until 3 January 1939. He was then recalled to the colours as war loomed, serving in France as part of the British Expeditionary Force from 3 September 1939 until he got away on 31 May 1940 presumably as part of the Dunkirk evacuation. He was posted to Aux Units on 1 July 1941. His Leave or Duty ration card for the period 15-17 August 1942 was signed by J Marchant, indicating that he was serving with the New Forest Scout Section. This was known to be composed of men from the Wiltshire Regiment and was based at Burley.

At some point in 1942/3 he was in Crieff. The Hydro, a large hotel at Crieff was often used by troops on their way to the mountain warfare centre in Banff. His Service record at this time was signed by Lord Delamere, Auxiliary Units Camp Commandant at Coleshill House. Chippy Saunders remained with Auxiliary Units until 1st February 1944, surviving the initial contraction of the Scout Sections in 1943. He transferred directly to the SAS, presumably being specifically recruited along with others from Aux Units.

Now Trooper Saunders of A Squadron, 1 SAS, he was to take part in Operation Titanic