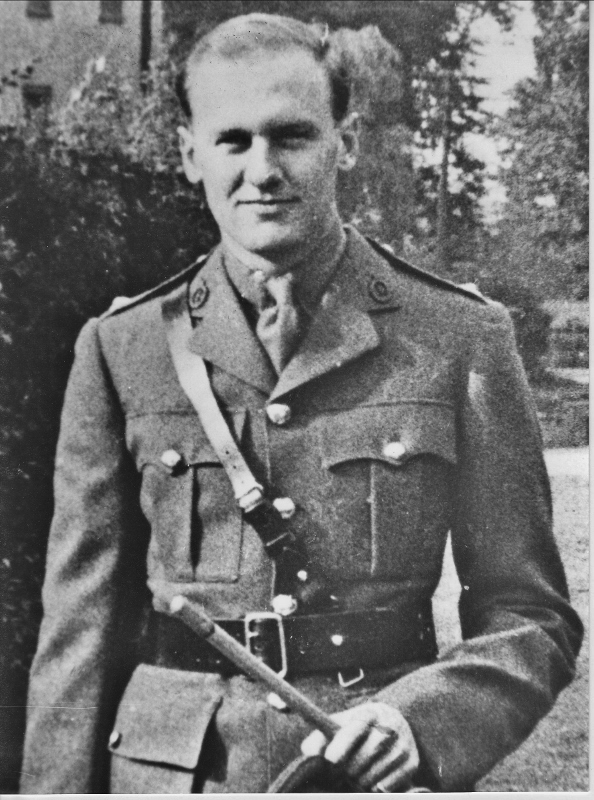 He was the son of Brigadier General Herbert Arthur Jones and Margaret (nee Holden) of Kelvedon, Essex.

In 1933, aged 17, he was one of the first two management trainees at Pye Radio Ltd of Cambridge, who manufactured components for wireless receivers.  He started in the Tool Room, rotating through all the mechanical shops, main assembly and service areas, the costing and estimating, and the work study departments, with gradually increasing responsibilities. In 1935, he was loaned to Pye Radio Ltd in Dublin as the local Associate's Managing Director. In 1938, he returned to England as the General Manufacturing Manager for Invicta Radio Ltd (Pye Ltd).

He married Betty Higson in March 1940 at Lexdon, Essex while on leave.

He was appointed Commanding Officer of the Auxiliary Units Royal Signals Detachment in February 1942. Beatrice Temple, ATS Senior Commander, noted in her diary that on Friday, 13 March 1942, she had met the 'new OC Signals Captain Jones'. By the autumn of 1942 the Joneses had moved into a cottage in Coleshill. Beatrice Temple was occasionally invited to dinner.

Post war he had a long and very successful civilian career. He returned to Pye Ltd working in different branches of the company as it expanded and merged with EK Cole, becoming a Managing Director. He retired from full time business in the summer of 1978.

Rupert Jones lived with his family in Oulton Broad until he died on 22 May 1992 and is buried in Oulton Broad St Michael's churchyard, together with his wife of 52 years.  The inscription at the foot of the gravestone reads: “52 memorable and never boring years”.

18 May 1939 Commissioned and served in 54 Divisional Signals, Territorial Army. On mobilisation on 1 September 1939 his unit was attached to the 4th Infantry Division and re-designated 4th (East Anglian) Divisional Signals. 4th Division was sent to the Belgian-French border. The force sustained heavy losses in the Battle of France, and Rupert Jones was amongst the 300,000 allied soldiers successfully evacuated from the beaches of Dunkirk between 26 May and 4 June 1940. At Dunkirk, the small boat Rupert Jones was escaping on, capsized and he had to swim back to the beach. There he fortunately found a lit stove in the sand dunes which he used to dry his clothes before making for the shoreline once again, where he was picked up by a small craft and taken to a British destroyer, steaming back to Britain asleep in the captain's cabin. The 4th Division spent the next two years in the UK on anti-invasion duties He subsequently joined Field Marshal Bernard Montgomery's 21st Army Group, serving in Belgium and later in north-west Germany. He was awarded a Mention in Despatches for his work. His last nine months in the army were spent in occupied Germany as Principal Staff Officer to the Chief Signals Officer 1st Corps.

He joined Auxiliary Units in February 1942 as the Commanding Officer of the Royal Signals detachment. He had been in close contact with Auxiliary Units prior joining them, although unaware of it at the time: “I was stationed for a time in Winchester with the 4th Divisional Signals. For a short period I rented a cottage, just on the edge of the town, for Betty (his wife) to live in. I was surprised when I joined the Auxiliary Units to find that one of their main radio stations was situated in the kitchen garden of the cottage, concealed underneath a cold frame which could be raised to to gain access. I had no idea it was there!” This was the Winchester Zero Station which reported to 4th Division HQ , based at West Downs School in Romsey Road. He remained commander until late June 1944, signing a map of all the outstations on the 28th.

He was one of the sources for The Last Ditch, by David Lampe, which first brought Auxiliary Units to public attention when published in 1968.