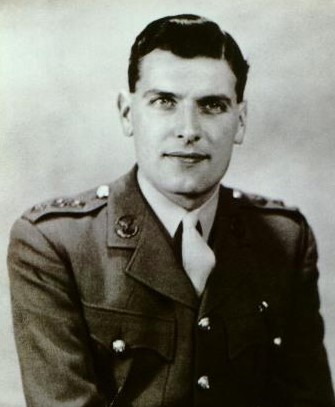 Victor Albert Gough was born in Hereford to Arnold Victor Gough and Margery nee Wood. Before the war he worked for the Imperial Tobacco Company in Bristol. At Imperial he trained in Mechanical Engineering. A keen cartoonist he may well have been known by Somerset I.O Ian Fenwick. During this time he was lodging in Ashford House, North Petherton, Somerset with Captain and Mrs Baird. Gough named Mrs Kathleen Baird as his next of kin in his SOE file and named her as executor for his will.

At the outbreak of World War Two he joined the Somerset Light Infantry with a short stint in the Royal Signals learning radio skills.

He moved north with the Somerset Light Infantry to Belford in Northumberland to train for D-Day. Here Gough seems to get involved with the Scout Section serving as their Intelligence Officer.

Now promoted to Captain, Gough took over the role as Auxiliary Unit Intelligence Officer in March 1942 following the departure of Captain Anthony Quayle. He based himself in Alnwick and Berwick during his stay. He left for SOE in November 1943.

After transferring to SOE he spent time qualifying for parachute jumps and small boat raiding. After the training he moved to the Jedburghs, and became part of Team "Jacob" His code name was "Aaron". While at the training centre at Milton Hall, Peterborough, Gough submitted the winning design in a competition for the Special Forces wing insignia to be used by Jedburgh Teams.

During a deployment to the Vosages Region in northern France as part of SAS Operation with Team "Loyton", Gough was dropped behind enemy lines on 12 Aug 1944 along with radio operator Sergeant Ken Seymour and Captain Boisserie. Their mission was to link up with the local Maquis leadership and serving as military advisers and ensuring supplies of arms and explosives. This wasn't successful and by the end of August his messages to SOE headquarters were becoming increasingly desperate; "Arms, ammunition, grenades urgently needed for 600 men...Area getting hotter daily...Have no W/T set...Could not receive arms...were attacked on DZ - many casualties. Team Loyton having resupply drop here in a few days. Please contact them and send me rucksack and a further 100,000 Francs...Food difficult...I am now sole member of Team Jacob. 100 Maquis killed, 100 captured in same battle. Rest dispersed..." His last message on 30 Sept was "Gave ground, SAS will liaise with you. Great difficulty working alone. Can't come up on regular skeds. Will come up on emergency channel when can..."

Gough was reported missing in October 1944 after he had been captured by the men of Einsatzkommando Ernst and interrogated by the Gestapo. The leader of the Maquis, Henry de Bouvier "Fred" said they found Gough was a Prisoner of War at Schirmeck-la-Broque Concentration Camp. The Red Cross later confirmed this. Captain V.A. Gough was last seen  on 8 Nov 1944. He was held in a "Block" (a prison within the camp) where he was severely beaten. Despite this Gough, along with German prisoner Helfman, were part of an escape committee and he often drew humorous cartoons on camp life. As the Allies closed in it was ordered that the block prisoners be moved further east towards Gaggenau. At 06.00 hours, 25 Nov 1944, a van took the prisoners to Erlich Wood where they were shot dead from behind, the bodies falling into a bomb crater. Stripped of their personal effects, which were burnt, the crater was filled in. Before being transported away Gough gave Helfman his SOE issued silk map as a keepsake.

In June 1945 his body was identified by his dental records and a past appendix removal. Gough's body was recovered from the mass grave in Gaggenau, Baden-Wurttenberg. He was re-buried at Grave 3.K.22 in Durnbach Cemetery, Germany which is maintained by the Commonwealth War Graves Commission. A British military court was convened in Wuppertal, Germany in May 1946 where 11 German nationals were put on trial for war crimes following the atrocity.

He married Edna May Phillips in 1939 while living in North Petherton and was divorced in Jan 1944. The divorce petition states he deserted her immediately after their weeks honeymoon in 1939 and she had not seen or heard from him since. (1943)

He is remembered as having dark hair and eyes and being "mesmerizing in appearance". 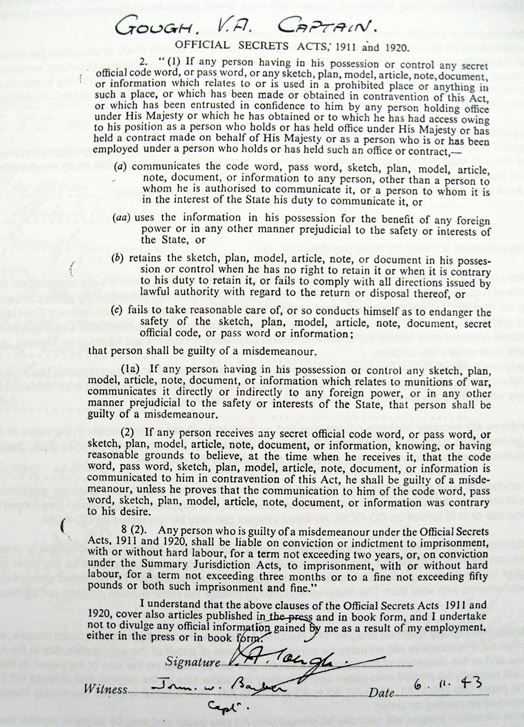 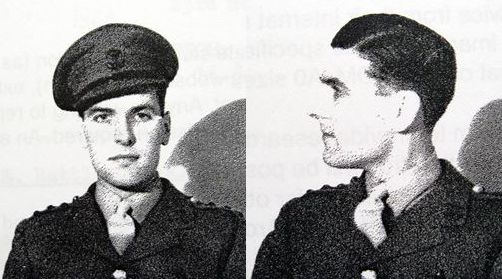 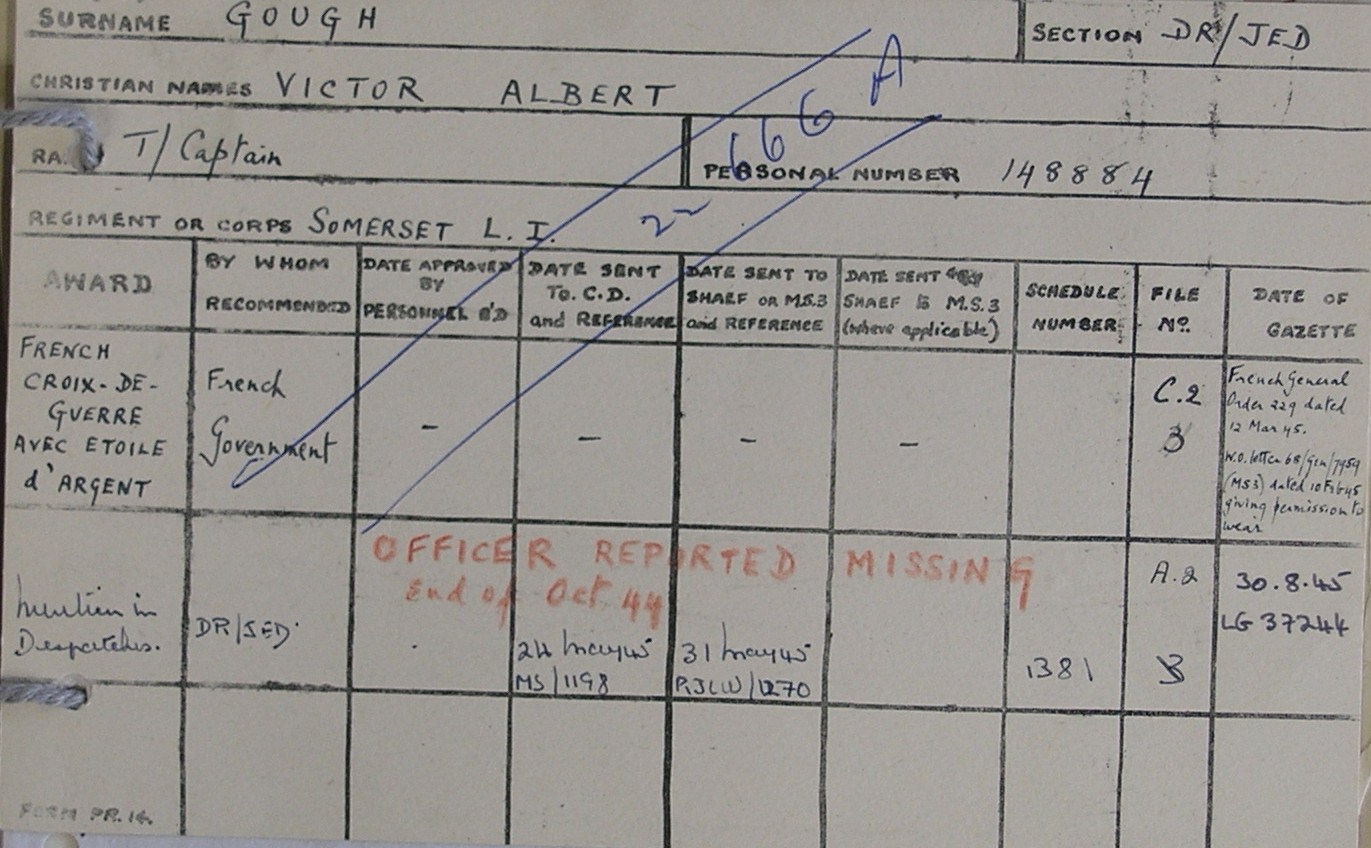 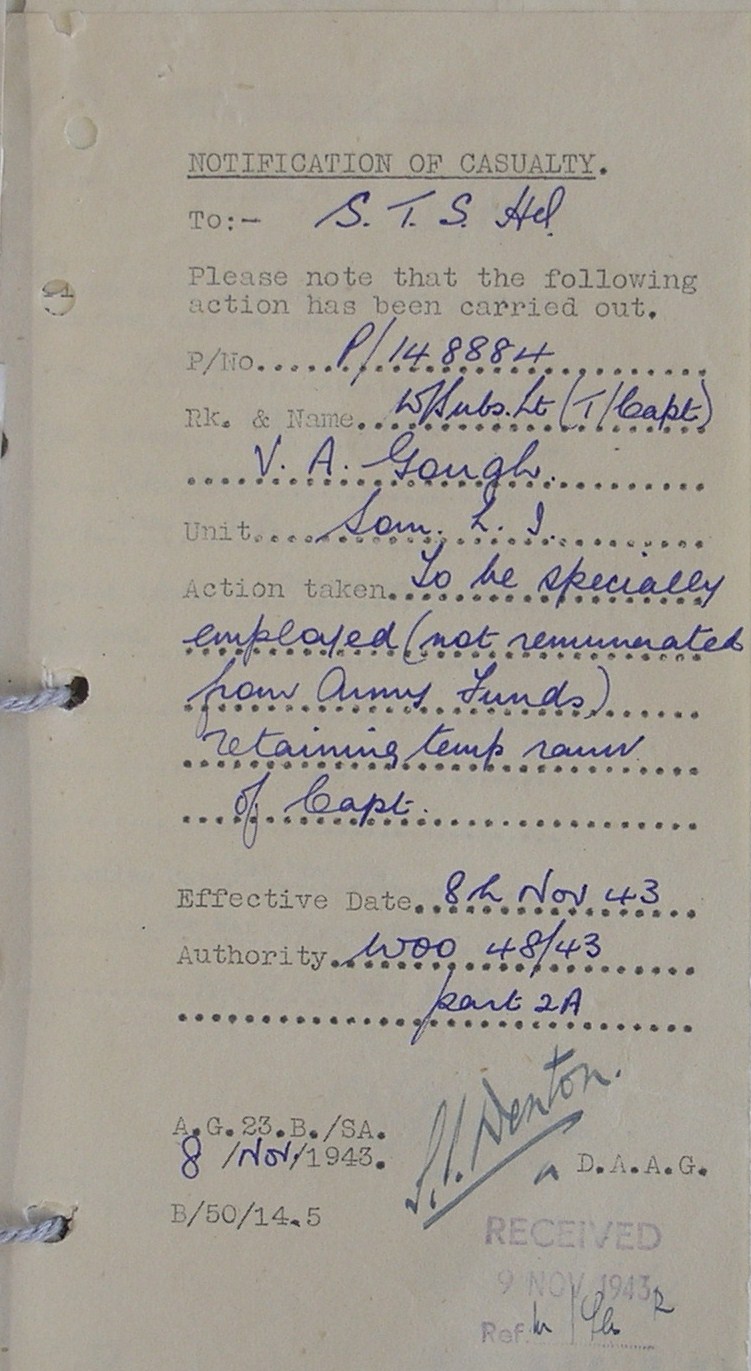 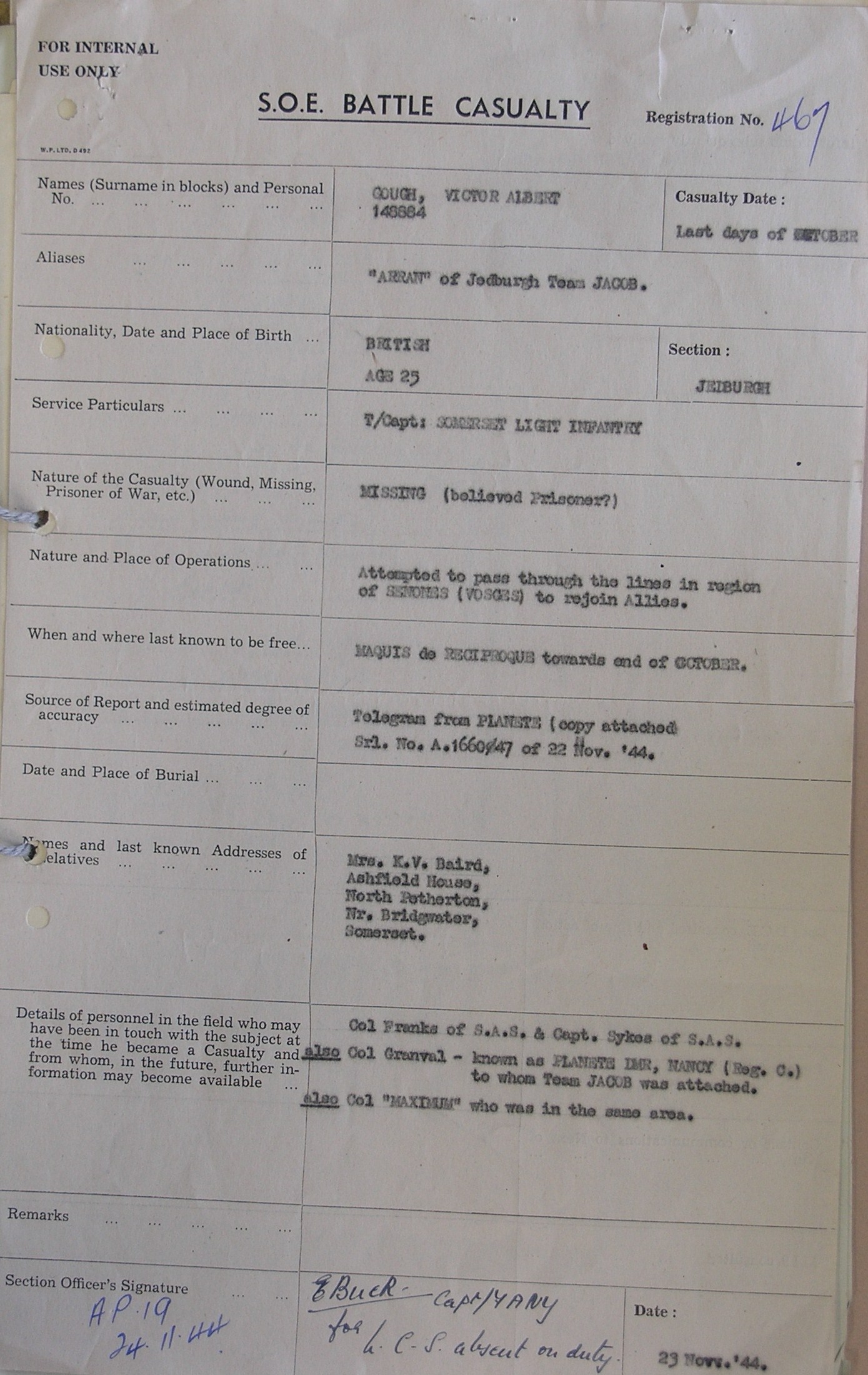 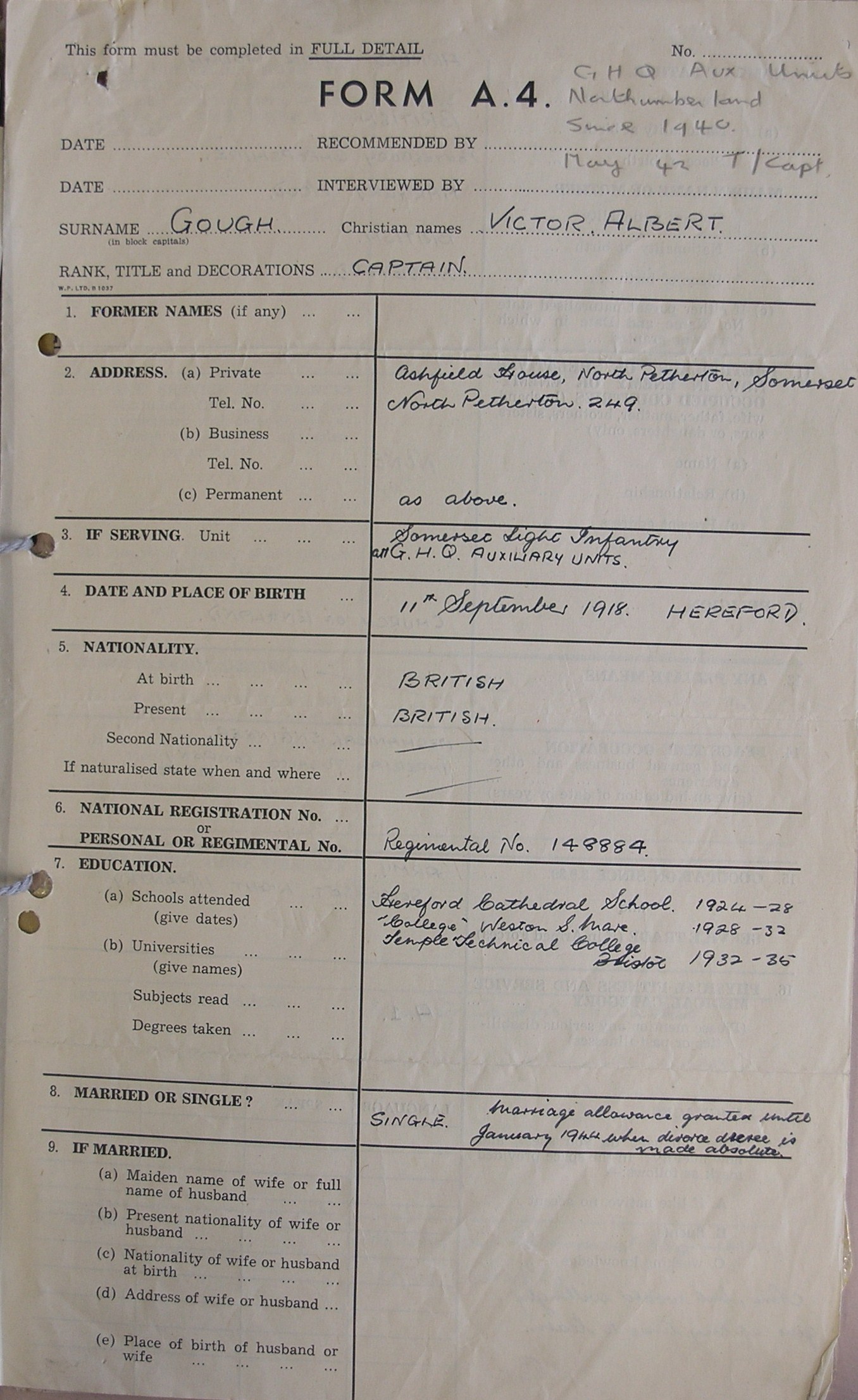 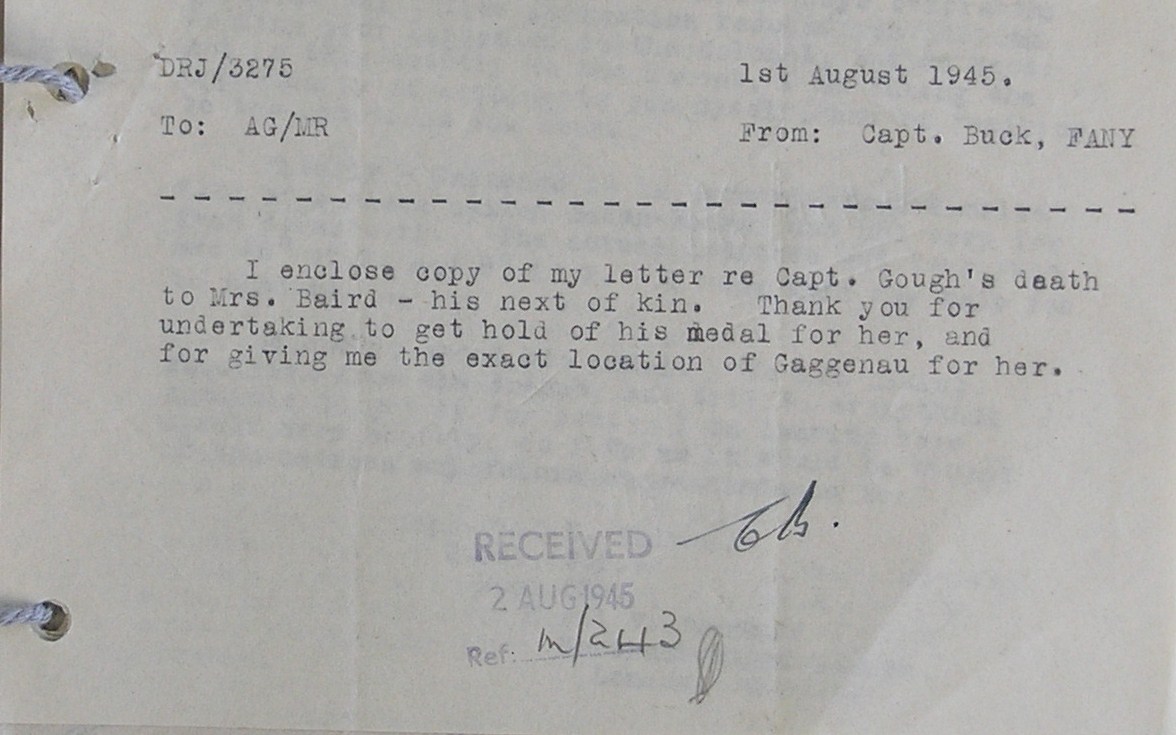 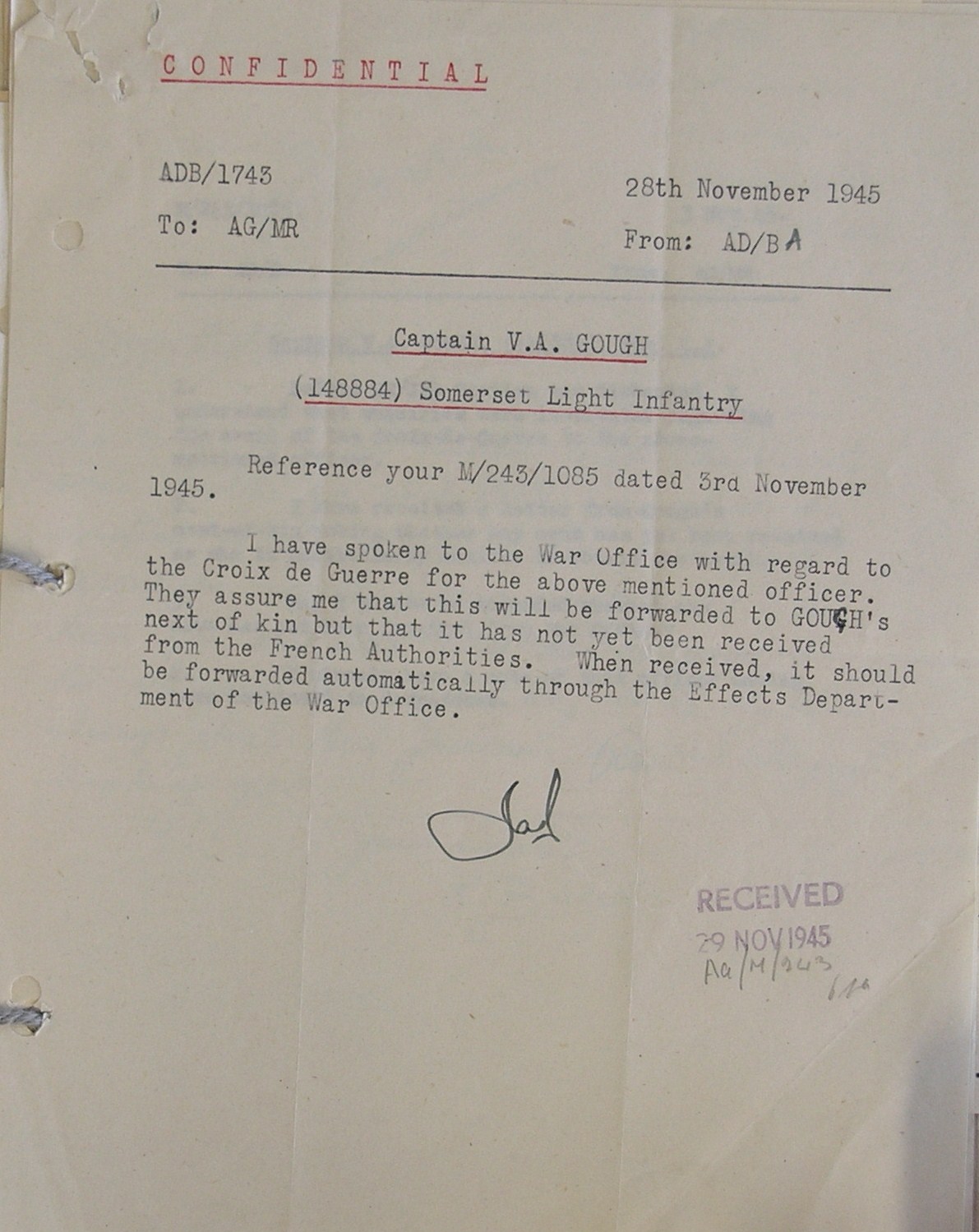 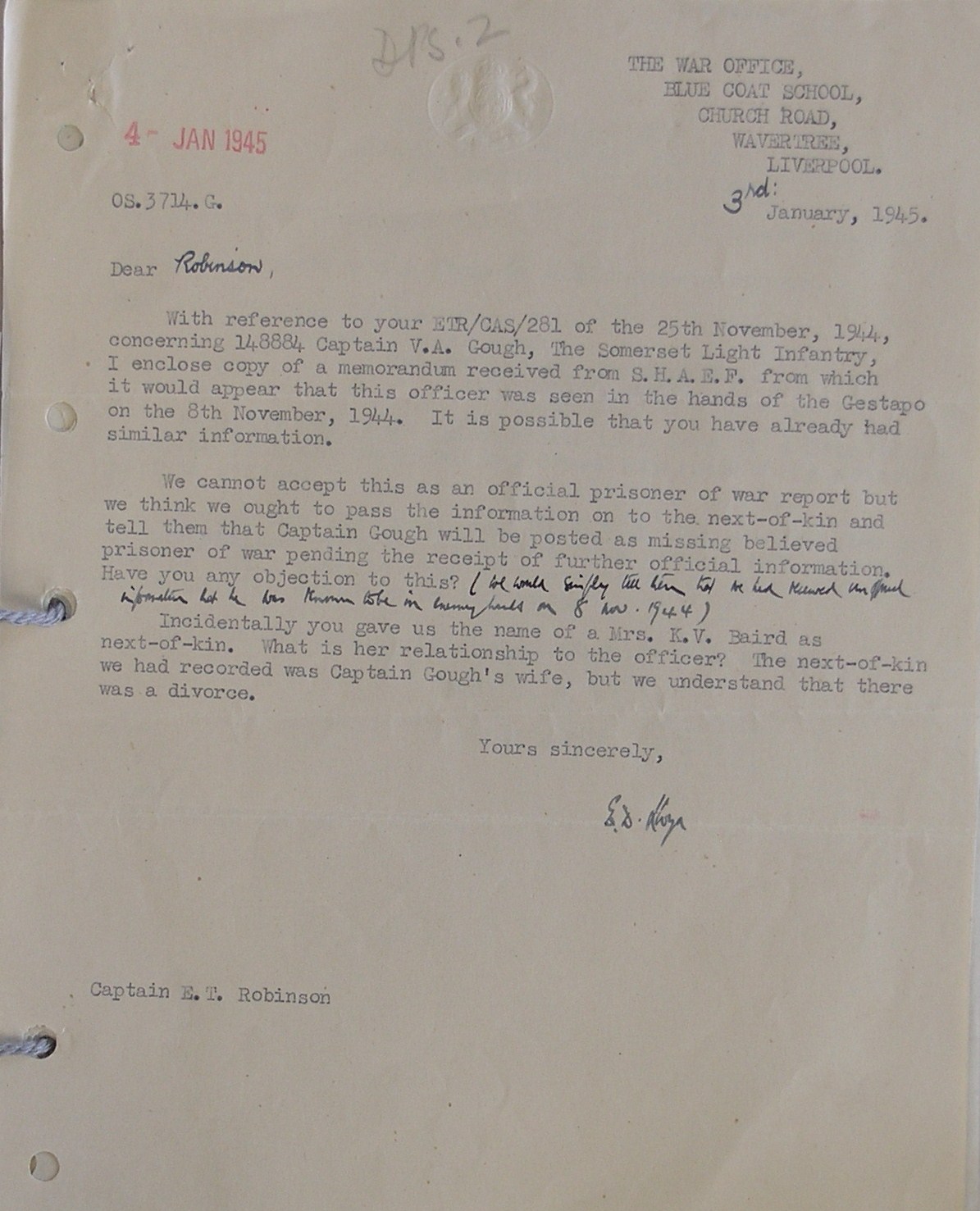 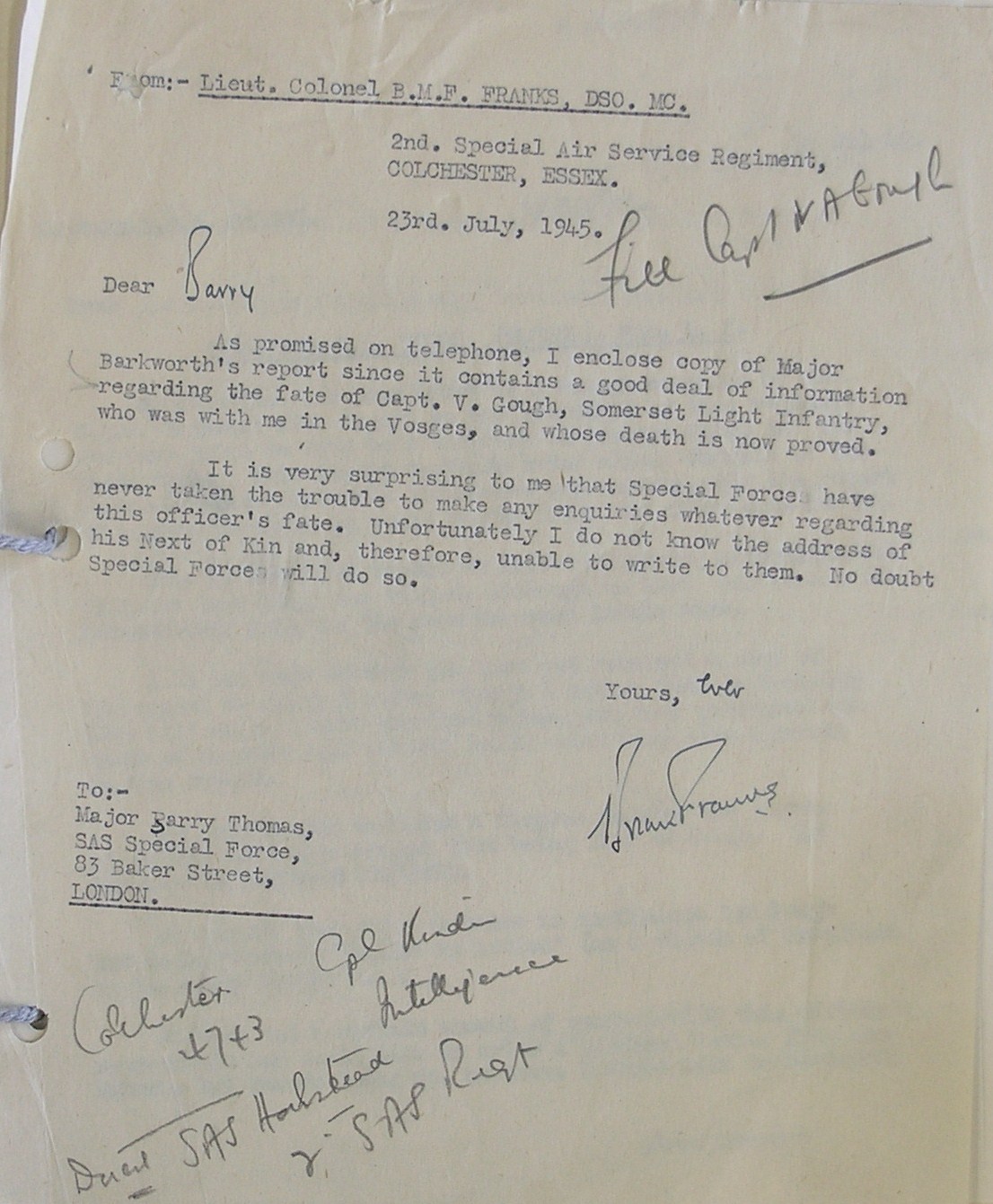 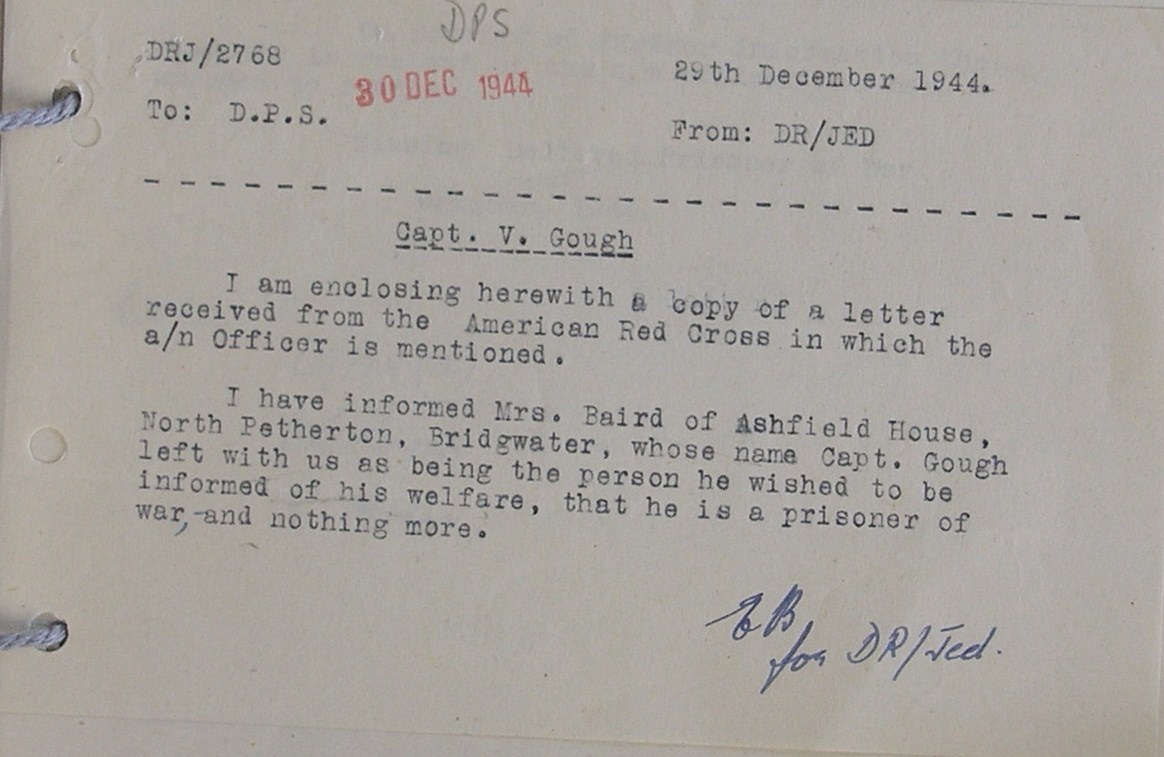 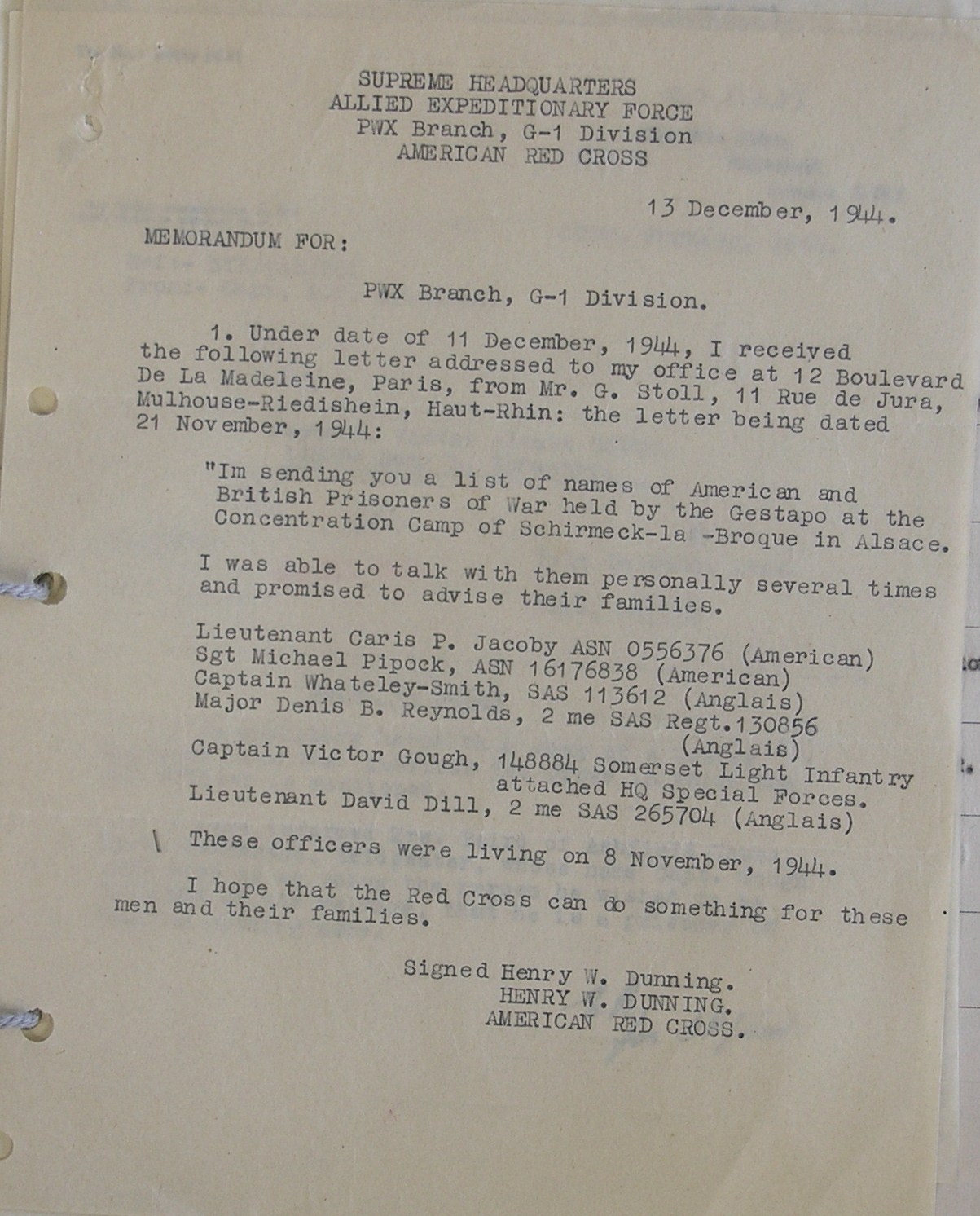 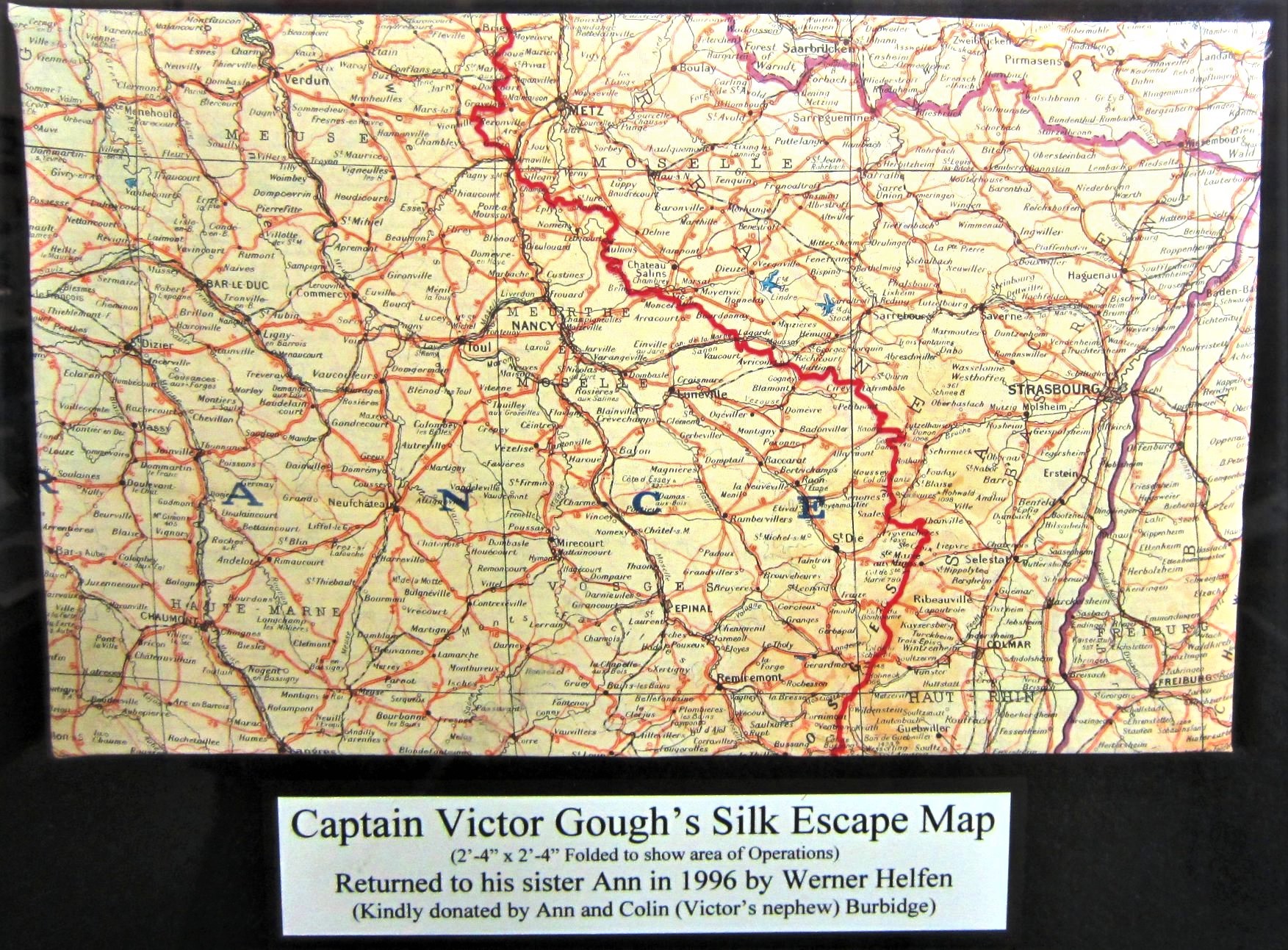 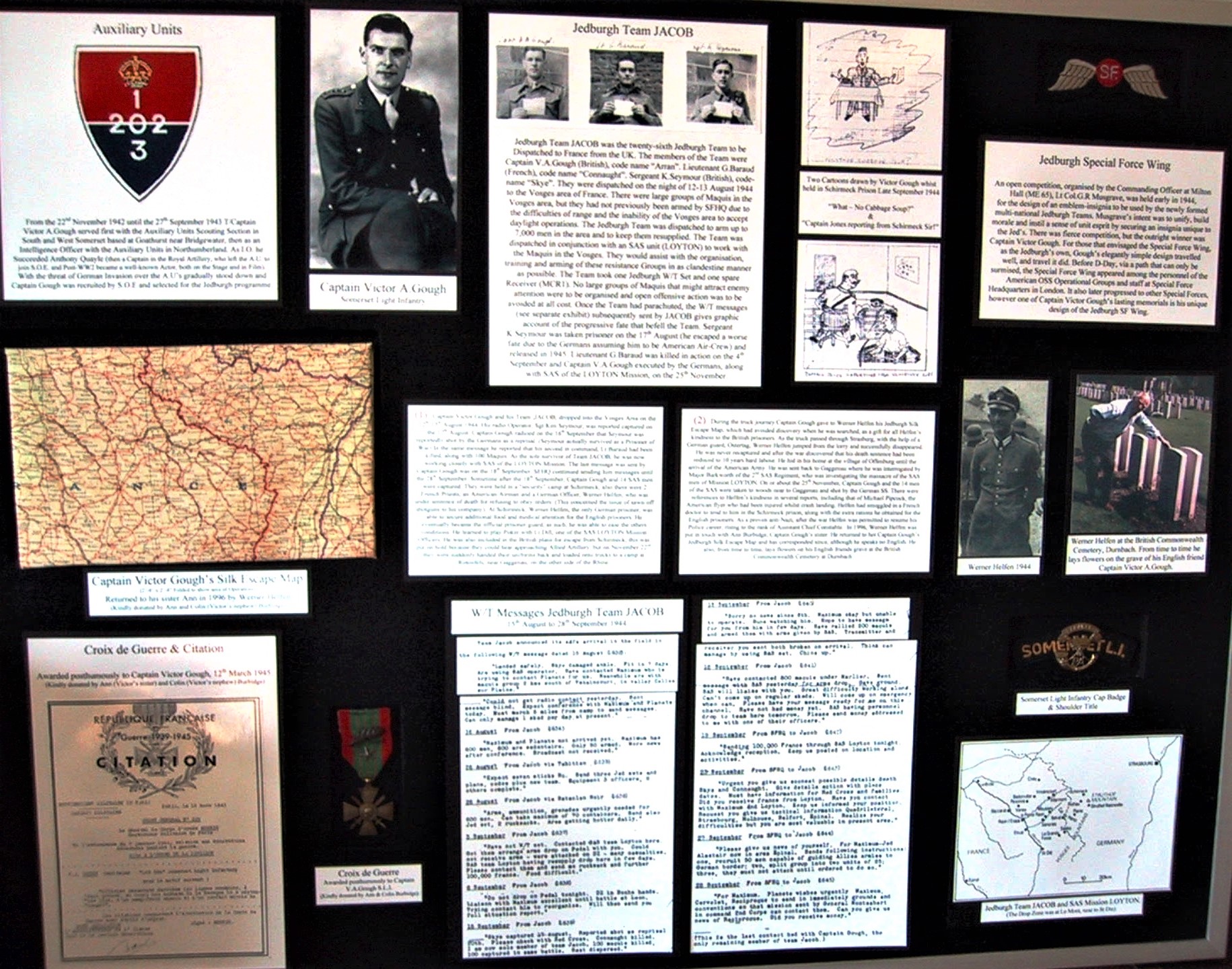 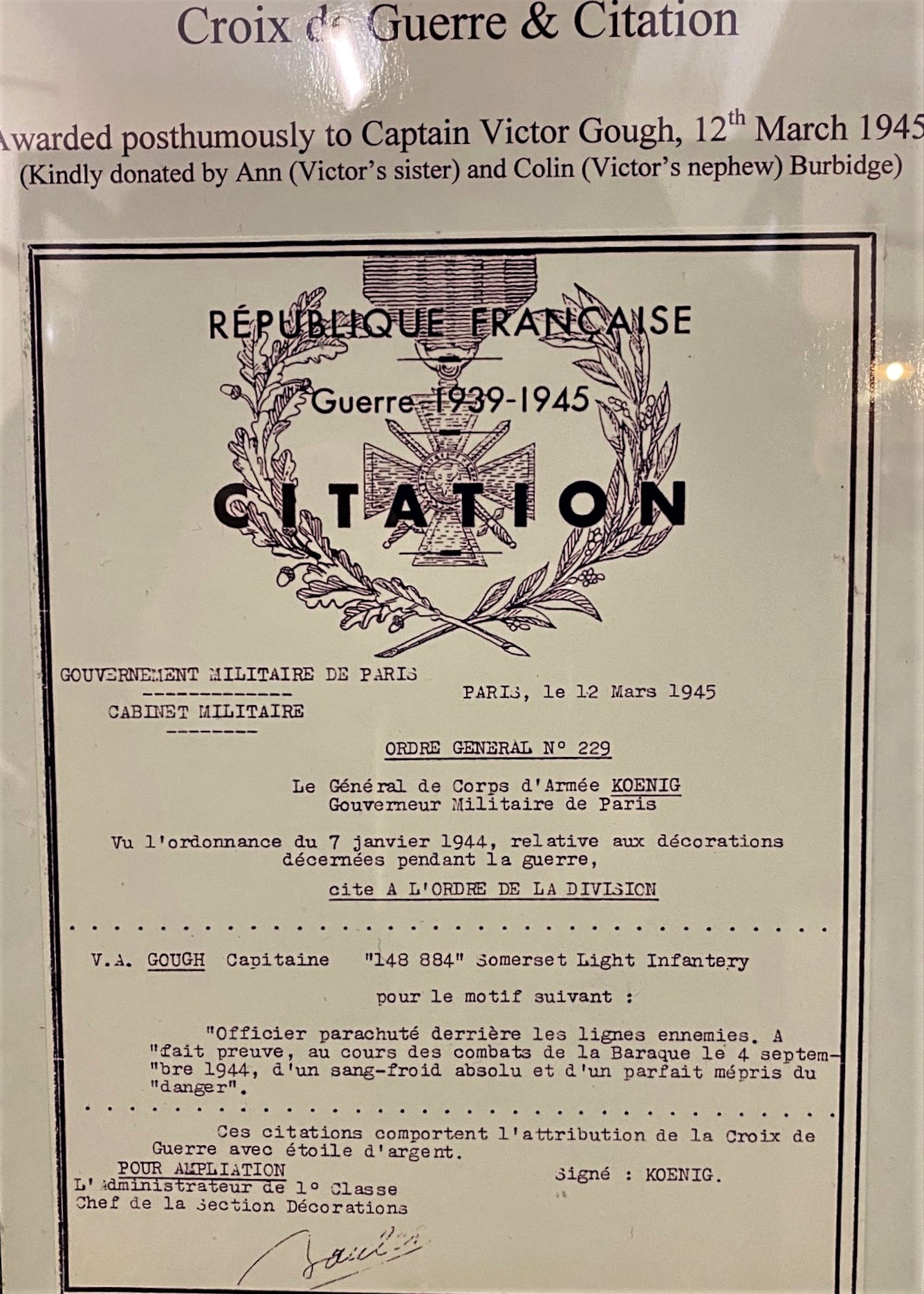 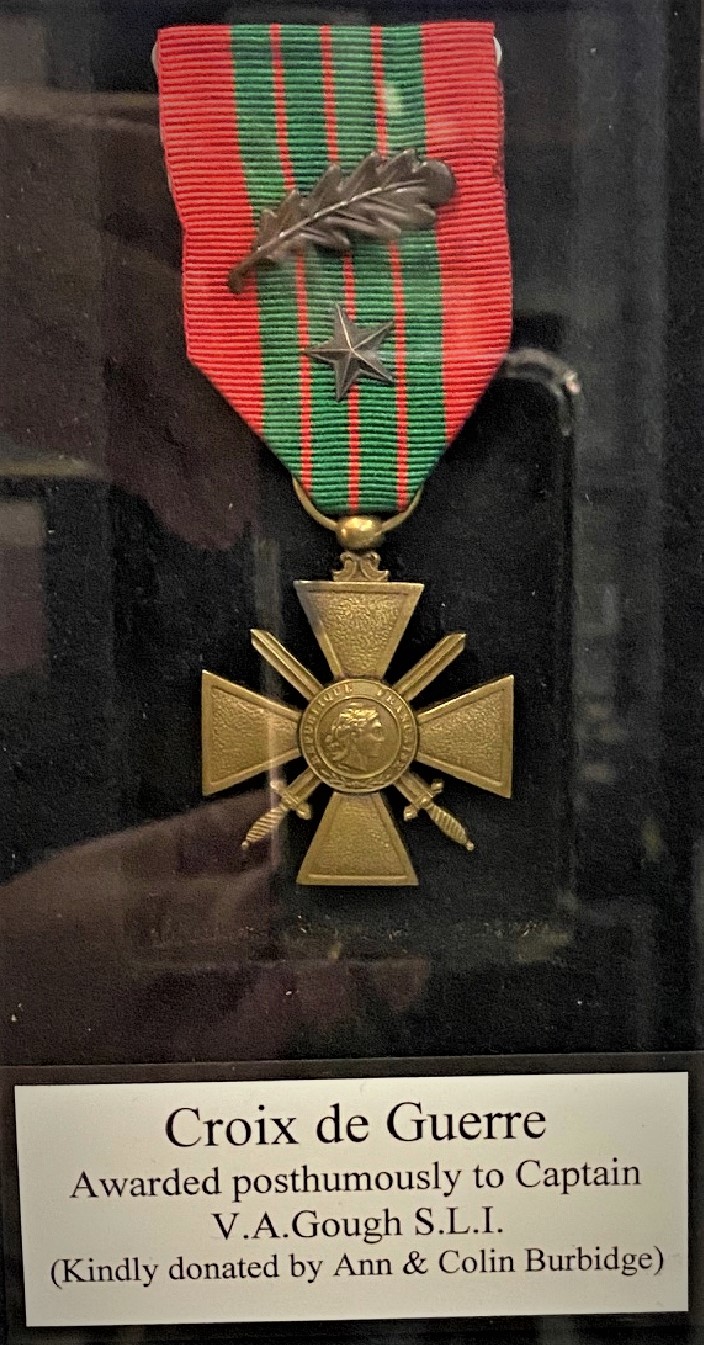