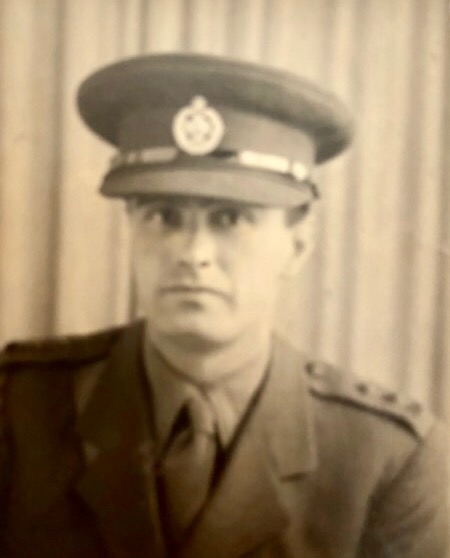 It appears that Archie Hubbard's commission is recorded with a single b in his surname, however it appears this was an error, though is how he is recorded in many official military records as a result.

He was born in Bedford. His father was a naval architect involved with the R101 airship which tragically crashed, ending the British airship programme.

In April 1939 he was with his widowed mother at Seaford. His occupation was given as a Tea Planter in India. He was also registered as a Merchant Seaman in 1939 so possibly had worked his passage home. However, his daughter believes that he never actually became a Planter due to the outbreak of war.

One of his older brothers, Pilot Officer John Ralph Hubbard, was killed when his Manchester bomber, predecessor of the better known Lancaster, was shot down over Germany.

In December 1943 he married his fiancee, Rachel S Hubble, sister of his friend John Hubble from Wye Agricultural College. Their son was born in Sherborne in Sep 1944, named Ralph for his his late uncle. Ralph tragically died at the age of 72, as the result of a crash on the Cresta Run, on which he had completed over 200 descents.

After the war the family lived on the Isle of Sheppey for a period and Archie then became a hop farmer, managing his father-in-law's farm in Kent. He then moved to Sussex, his death being recorded in Ticehurst where he ran the Post Office, though he is also noted to have lived in Wadhurst where they had a smallholding. He was a member of the post-war Home Guard in the early 1950s.

Nov 1939 - Mar 1941 Service in the Ranks, with the Royal Sussex Regiment, including in France 1940 at Calais
He kept glass tiles from the roof of Calais Station and used them for many years as ash trays.
Commissioned July 1941, served in North Africa, with 2nd Battalion The Rifle Brigade.
1 Oct 1941 reported wounded and missing, believed captured.
He had been on a patrol when they found themselves in the middle of a German camp. He was shot in the chest, the bullet fortunately missing his lung, but paralysing the nerves in his arm for some time. The German who shot him visited him in hospital the next day and gave him a packet of cigarettes! He was transferred to a prisoner of war camp in Italy.
8 Sep 1943 Escaped from his Prisoner of War Camp, PG49 at the time when Italy switched sides and they were briefly unguarded.
His journey of escape from Italy is described by Carol Mather in his book as they walked together. The two men walked around 600 miles over a 6 week period, helped all the way by Italian peasants.
Arriving at the British lines Mather arranged for them to be taken to Montgomery's headquarters, where he had worked a year earlier. Montgomery was away in Britain for a meeting and Archie Hubbard was billeted in Monty's bedroom caravan, originally captured from the Italian Field Marshall Messe in May 1943.
23 Oct 1943 Sent a telegram to his mother to confirm he had escaped and was safe.
He was flown to Algiers and then a troopship returned him to Liverpool.
Nov 1943 arrived back in the UK. After escapers leave he was appointed as Intelligence Officer with Auxiliary Units. It is unclear how this happened. He was welcomed at Monty's HQ by Major John Ronald Henderson, great nephew of Captain Michael Thomas Henderson, who was responsible for Auxiliay Units moving to Coleshill. Alternatively, Carol Mather may have recommended him to Colonel Glanusk, having been at the Welsh Guard Depot with him earlier in the war, prior to his service with No.8 Middle East Commando, the SAS and Phantom. Mather would later become an Member of Parliament.
13 Jul 1944 Appointed Temporary Captain (likely had been an Acting Captain prior to this).
27 Sep 1944 Joint Intelligence Officer for Auxiliary Units Area 2 (Yorkshire to Suffolk).
He had been kept on as Auxiliary Units was being wound down as the youngest of the Intelligence Officers. He was graded category B, which meant he was not fit enough for overseas service, following his injury in the desert.
Dec 1944 Ceased to be employed by Auxiliary Units.
12 Jul 1946 Relinquished Commission on grounds of disability. 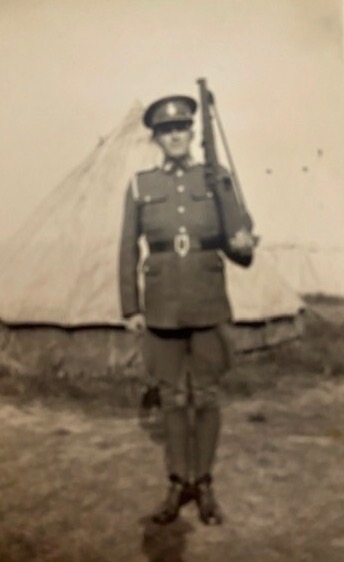 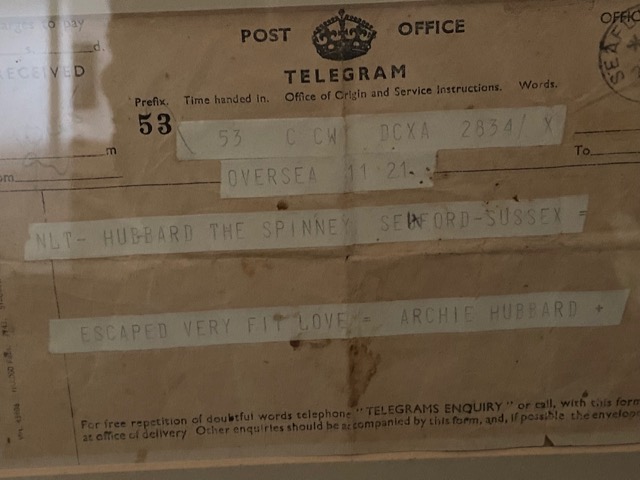 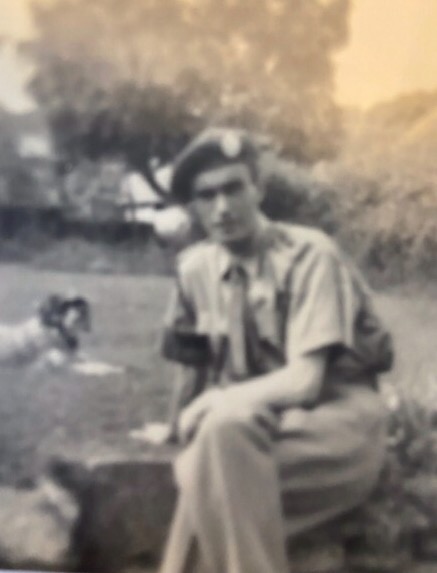 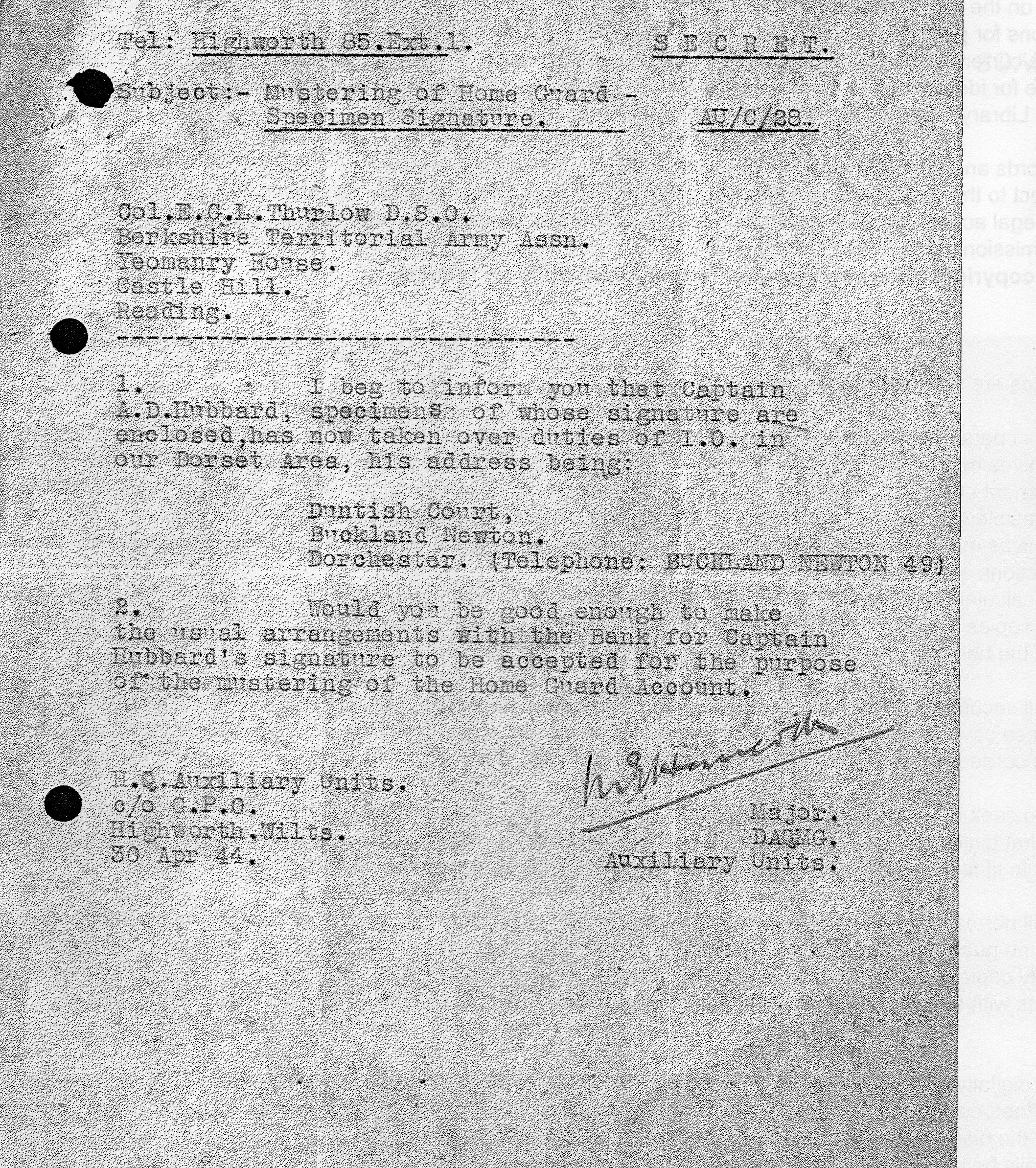